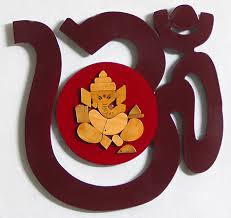 Sacred Hindu Symbol and Syllable of the Absolute “OM”

Omkaram the word itself creates a divine feeling on hearing. One can feel the supreme sprit of it. Om is a spiritual symbol (pratima) referring to Atman (soul, self within) and Brahman (ultimate reality, entirety of the universe, truth, divine, supreme spirit, cosmic principles, knowledge).

OF all the mantras, the most powerful and the significant one is the single-syllabled incantation called the Pranava, This is the OM. The available literature upon the significances of the Vedic mantra is almost voluminous. Nowhere in the world can we meet with a more sacred symbol that has got such a vast amount of significance. OM is the container for the Supreme and, therefore, invoking OM is invoking the Supreme. The recitations continue to be in use, and major incantations and ceremonial functions begin and end with Om

In Sanskrit, the sound “O” is a diphthong spelled “AU”. A diphthong is the blending of two vowel sounds where both are normally heard and make a gliding sound. As a result, the difference between OM and AUM is simply one of transliteration

OM represents the Self which is the Supreme Nondual Reality. The Self is known in four states, namely, the waking state, the dream state, the deep-sleep state, and the fourth state called the turiya. All these states are represented in the three sounds of OM (i.e., A, U, M***), and the silence that follows and surrounds the syllable.
AUM represents the 3 Fold Division of Time

At the end of AUM is a pause, a silence. This represents the state known as Turiya, or Infinite Consciousness

The visual symbol represents the meaning of AUM

The symbol OM visually consists of three curves, one semicircle, and a dot.

The large bottom curve symbolizes the waking state A.
The middle curve signifies the dream state U.
The upper curve denotes the state of deep sleep M.
The dot signifies the fourth state of consciousness, Turiya.

The semi circle at the top represents Maya and separates the dot from the other three curves. It signals to us that it is the illusion of Maya that is an obstacle to realization of the Highest.
Chanting the divine single word OM creates a spiritual Consciousness in everyone .Being good, doing good always paves a way for the Supreme lord.

It solves your finance problems,health problems it gives positive energy to you
Cleanses the organs, nerves and muscles
Expands your aura
Improves memory, preserves recollections in adulthood
Provides a stronger, additional assured voice
Relaxes your mind and relieves stress
Gives you healthier hair and clear skin
Provides one answer to your several issues
Boosts your inner peace and happiness
Uplifts your soul and will increase your spirituality.

Precautions to require once Om Chanting:

Try to be as snug and relaxed before you start vocalizing to actually increase your spirituality.
Keep your face neutral or happy once vocalizing to realize confidence and wonder – anxiety on your face once vocalizing will cause you to look harsh.
Keep the religion – it’s all concerning dedication, therefore keep in mind to concentrate and believe Om once vocalizing it.
Believe in what you chant – merely voice communication “Om” can yield no positive results.
The silence is simply as necessary because the chant, therefore fancy the cosmic energy when your prayers.