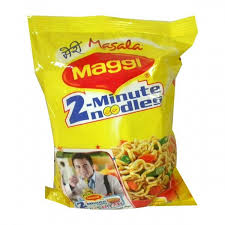 Maggi is an international brand of seasonings and instant soups and noodles owned by Nestle
since 1947. The original company was founded in Switzerland in 1872 by Julius Maggi.
In 1947, following several changes in ownership and corporate structure, Maggi’s holding company
merged with the Nestle company currently known in its francophone homebase as Nestlé S.A.
India’s food safety regulator said tests have found Nestle India’s Maggi instant noodle products are “unsafe and hazardous”.

Maggi is the market leader in India, Nestle’s global chief executive promised to return Maggi to store shelves.
Paul Bulcke told reporters in New Delhi: “I am confident that we are going to come back very soon.

Name Analyis on maggi
People or product with this name number tells us abandonment, or destruction of the PERSON OR PRODUCT.they tend towards social causes, a minimum of there’s a deep concern for the unfortunate things will be going to happen. Their personal lives would be out of hand,Worse, namely,sacrificed and misused. they have to stop troubled, and move out of palsy and stagnation. knowledge & happiness is gained, this name number troubles you personally in education and career.Example: Diana,the prince of wales,first wife of charles