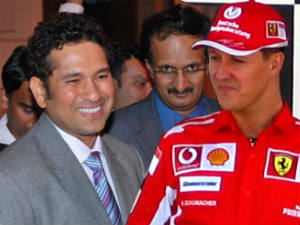 Numerology India Numerology Report Free Numerology Reading
Numerology Analysis on Michael Schumacher
Born:3 January 1969 (age 47)
Few numbers played a vital role in schumachers life 2,3,6,7
Michael Schumacher is a retired German racing driver. He is a seven-time (again 7) Formula One World Champion and is widely regarded as one of the greatest Formula One drivers of all time. He was named Laureus World Sportsman of the Year twice(again 2).He won two titles with Benetton in 1994-1+9+9+4=( again 5) and 1995-1+9+9+5=6. After his second (again 2) title he moved to Ferrari for which he drove eleven(1+1=2)years. His time with Ferrari yielded five(again 5) consecutive titles between 2000(2+0+0+0=2) and 2004(2+0+0+4=6)

In 1991=1+9+9+1=2, his Mercedes-funded race debut for the Jordan Formula One team resulted in Schumacher being signed by Benetton Formula One team as their driver for the rest of that season. Establishing himself as a top driver.Schumacher returned to Formula One on a permanent basis from 2010(2+0+1+0=3) with the Mercedes team before retiring for a second(again 2) time at the conclusion of the 2012(2+0+1+2=5) season.

His career was not without controversy, including being twice(2) involved in collisions in the final race of a season that determined the outcome of the World Championship, with Damon Hill in 1994(1+9+9+4=23-2+3=5) in Adelaide

Early years
At the age of six(again 6) Schumacher won his first club championship. To support his son’s racing, Rolf Schumacher took on a second(again 2) job renting and repairing karts

Regulations in Germany require a driver to be at least fourteen years old to obtain a kart license. To get around this, Schumacher obtained a license in Luxembourg at the age of 12(1+2= again 3)

In a 2006 FIA survey, Michael Schumacher was voted the most popular driver of the season among Formula One fans
Schumacher made his Formula One debut with the Jordan-Ford team at the 1991(1+9+9+1=20= again 2) Belgian Grand Prix, driving car number 32 (3+2= again 5)

His best finish was fifth(again 5) in his second race, the Italian Grand Prix, in which he finished ahead of his team-mate and three-time World Champion Nelson Piquet.

Benetton B192 Schumacher took his place on the podium for the first time, finishing third(again 3) in the Mexican Grand Prix.
Schumacher driving for Benetton at the 1995 British Grand Prix

Schumacher won six(again 6) of the first seven races and was leading the Spanish Grand Prix, before a gearbox failure left him stuck in fifth gear. Schumacher finished the race in second(again 2) place

In 1995 Schumacher successfully defended his title with Benetton. He now had the same Renault engine as Williams. He accumulated 33 (again 6) more points than second-placed Damon Hill. With team-mate Johnny Herbert, he took Benetton to its first Constructors’ Championship and became the youngest two-time(again 2) World Champion in Formula One history.

Schumacher finished third*(again 3) in the Drivers’ Championship in 1996 and helped Ferrari to second place in the Constructors’ Championship ahead of his old team Benetton. He won three races, more than the team’s total tally for the period from 1991 to 1995.
Schumacher celebrates a second-place(again 2) finish at the 1997 German Grand Prix

After missing six (again 6) races he made his return at the inaugural Malaysian Grand Prix, qualifying in pole position by almost a second(again 2).

Ferrari won 15(again 6) out of 17 races, and Schumacher won the title with six(again 6) races remaining in the season, which is still the earliest point in the season for a driver to be crowned World Champion,Schumacher broke his own record, shared with Nigel Mansell, of nine race wins in a season, by winning eleven(1+1= again 2) times and finishing every race on the podium.

In 2004, Schumacher won a record twelve(1+2= again 3)of the first thirteen races of the season, only failing to finish in Monaco after an accident with Juan Pablo Montoya during a safety car period when he briefly locked his car’s brakes.

Schumacher battling with Kimi Räikkönen during the 2005 Canadian Grand Prix

The press release stated that Schumacher would continue working for Ferrari. It was revealed on 29 (2+9=11=1+1= again 2)29th October 2006 that Ferrari wanted Schumacher to act as assistant to the newly appointed CEO Jean Todt.This would involve selecting the team’s future drivers.

At the Monaco Grand Prix Schumacher finished sixth after passing Ferrari’s Fernando Alonso on the final corner of the race when the safety car returned to the pits. However, he was penalised 20(again 2) seconds after the race by the race stewards dropping him to 12th(1+2= again 3).

In Turkey, Schumacher qualified fifth(again 5), and finished fourth in the race, both his best results since his return. In European Grand Prix in Valencia, Schumacher finished 15th(again 6), the lowest recorded finish in his career

At the Indian Grand Prix Schumacher started well and finished fifth(again 5) after overtaking Rosberg at the end of the race. Schumacher diced again with Rosberg in Abu Dhabi Grand Prix, battling over sixth position on the first lap.

On 23(2+3= again 5) June 2003(again 5), Schumacher was appointed as an Ambassador-at-Large for the Most Serene Republic of San Marino
Schumacher is a special ambassador to UNESCO and has donated 1.5(1+5= again 6) million euros to the organization, he has donated throughout his life is unknown, it is known that in his last four years as a driver, he donated at least $50(again 5) million

As per news
The seven-time (7) F1 racing champion, Michael Schumacher, is still under a medically induced coma after suffering severe head injuries in a skiing accident last December 2013. His wife, Corinna, reportedly sold the family’s luxury assets to support Schumacher’s medical bills.
The F1 legend has an estimated net worth of more than $750(7+5+0=12=1+2=3) million according to International Business Times. Last Saturday, Corinna sold her husband’s £25(7) million ($39 (3)million) jet and even considered selling the family’s home in Meribel, France, the area where the ski accident happened, to cover the costs of rising medical bills.

Finally Visharada Numerology Wishing him a speedy recovery and looking forward to have you back soon.