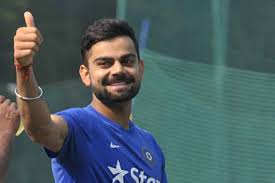 Virat Kohli born 5 November 1988 is an Indian international cricketer. He is a right-handed batsman and occasional right-arm medium pace bowler. He is the current captain of the Indian team in Test cricket and vice-captain in limited overs formats. In the Indian Premier League (IPL), he captains the Royal Challengers Bangalore
ANALYSIS
He is the replacement for sachin tendulkar,virat date of birth states that he has the capability to break sachin records

People who born on 5th are well known and popular personality he is always energetic jovial flexible and adaptable nature they impress people with charming personality they are fast and understanding the things very quickly
and easily grasps anything,In short they are quick learners he is very fast while speaking they openly express his ideas and do not want to hide anything

They always takes risk while playing ..In future he will bring many changes in indian team he is going to implement his ideas he will continously works hard to reach high position .He want to try new things and do not want to repeat the same, the only weakness about virat he never say NO to anyone when anyone wants his needy help he should be very cautious while dealing with anyone, the reason for his success in ipl 2016 he has great self confidence and he is blessed with universal intelligence. surely he will be get into business and shines well .He is advised to be careful before getting married as per his zodiac sign he may get DISTURBANCE IN HIS MARRIED LIFE to avoid this he should be very careful. other than cricket he plays a MAJOR role in business

NAME ANALYSIS:THIS NAME NUMBER TELLS THAT THEY COME OUT WITH UNIQUE IDEAS AND TECHNIQUES AND IMPROVES A LOT IN THEIR BATTING TECHNIQUE HIS NAME NUMBER HAS A GOOD VIBRATION IT MAKES HIM PROMINENT IN INDIAN TEAM WITHIN SHORT
PERIOD OF TIME HE IS GENIUS AND ATTAINS HIGH POSITION IN ALL FORMATS OF THE GAME

Favourable numbers like 4,5,6,8 played a vital role in his career

Kohli was selected in India’s Test squad for the tour of Australia in December 2011(2+0+0+1=4)
Kohli was appointed the vice-captain for the 2012(5) Asia Cup in Bangladesh
In March 2013(6), Kohli started a charity foundation called ‘Virat Kohli Foundation’ (VKF)