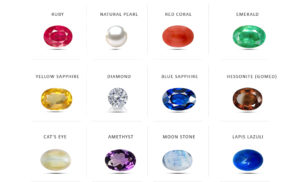 Gemstones and Navaratnas
Gems are precious stones which absorb a specific gem colored light. we have mainly 9 gems called navaratnas in Indian vedic astrology. They are Pearl, Coral, Yellow Sapphire, Blue Sapphire, Ruby, Hassonite and Cat’s eye, Diamond, Emerald, As per astrology gems are interconnected to the 9 planets depending on the color. gems can be used for curing diseases and to bring success prosperity fame wealth .

When we wear Ruby, we get the Red colored rays being absorbed into our body,similary other gem stones it absorbs particular color rays into our body and hence the effect of these rays will produce good results.EXAMPLE: It has been proven scientifically that the Red color increases Will-power, Anger, Dynamism, Blood circulation

What is the interconnection between gems and Planets?
Each planet has is own energy which is fully absorbed in a particular gem on the earth.If anyone facing any health issue ,financial problems etc he has to wear that particular gem based on his problem it will nullify his problems

Emerald: one who wears emerald, causing the power of intelligence, presence of mind, right decisions in business, communication, speculation, scientific education. It can be avoid from madness, stammering, and nervous problems.

Diamond: one who wears diamond. Delays in marriage, bad married life, diseases of reproductive system, lack of luxuries in life can be overcome by using a diamond.

Hessonite: one who wears a hessonite it eliminates problems like cholera, dysentery, hallucinations, and problems from evil spirits.

Pearl: one who wears a pearl protects a person from diseases of lungs and stomach, water-born diseases, emotional problems, and impulsive decisions.

Coral: one who wears a coral It is used to get rid of skin diseases, fevers, accidents, abortions, burns and enmity with others.A Coral increases practicality, quickness in doing the things and vigor.

Any gem before wearing one has to energise the gem by chanting the relevant Mantra during a period of time. Then it should be worn in a ring to a suitable finger of right hand on an auspicious day.

Note:Take the help of numerologist or Astrologer to determine which gem is suitable for you. be careful that if you wear an unsuitable gem, you are inviting more problems into your life.
.

Selection of gem stone based on your lagna

Selection of gem stone based on your birth month

Selection of gem stone based on your Moon sign 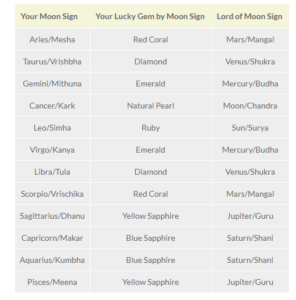 Selection of gem stone based on your Raasi 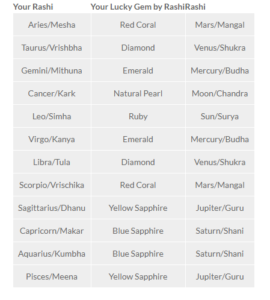 Selection of gem stone based on your zodiac sign 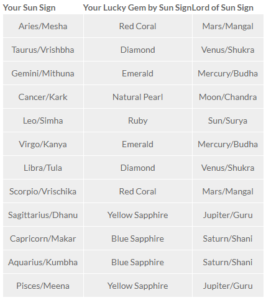 Selection of gem stone based on your birth star ( nakshatra) 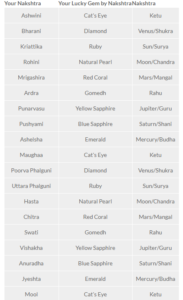 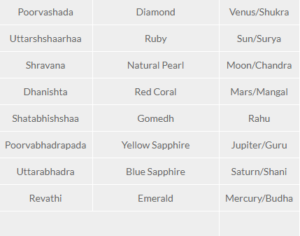 Note:Take the help of numerologist or Astrologer to determine which gemstone is suitable for you.be careful that if you wear an unsuitable gem, you are inviting more problems into your life.now a days duplicate stones are coming into the market be careful before buying gemstones
.