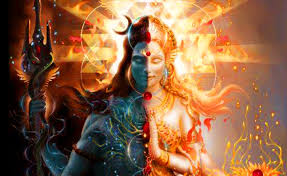 Understanding the Attire (Form and Dressing) of Lord Shiva

Lord Siva represents the Destructive (for transformation) aspect of Brahman. That portion of Brahman that is enveloped by Tamo-Guna-Pradhana Maya is Lord Siva who is the all-pervading Isvara and who also dwells in Mount Kailas. He is the Bhandara or store-house for wisdom. Siva minus Parvati or Kali or Durga is Nirguna Brahman Himself. With Maya-Parvati He becomes the Saguna Brahman for the purpose of pious devotion of His devotees. Devotees of Rama must worship Lord Siva for 3 or 6 months before they take to worship of Rama. Rama Himself worshipped Lord Siva at the famous Ramesvaram. Lord Siva is the Lord of Ascetics and Lord of Yogins, robed in space (Digambara).

*His Trisul (trident)* that is held in His right hand represents the three Gunas—Sattva, Rajas and Tamas. That is the emblem of Sovereignty. He wields the world through these three Gunas.

*The Damaru in His left hand represents the Sabda Brahman. It represents OM from which all languages are formed. It is He who formed the Sanskrit language out of the Damaru.*

*LORD SIVA AND HIS WORSHIP:*

I bow with folded hands crores of times at the lotus-feet of that Lord Siva who is non-dual, who is the *Adhishthana*, or support for the world and all minds, who is Sat-Chit-Ananda, who is the Ruler, the *Antaryamin*, the Sakshi (silent witness) for everything, who is self-effulgent, self-existent and self-contained (Pari-purna), who is the remover of the primitive Avidya and who is the Adi-Guru or Parama-Guru or Jagad-Guru.

*Snake On The Body Of Siva:*

Serpent is the Jiva or the individual soul which rests upon Siva, the Paramatman or the Supreme Soul. The five hoods of the Serpent mean the *five senses* or the *five Tattvas*, viz., *earth, water, fire, air and ether*. They also represent the *five Pranas*, which hiss in the body like the serpent. The inhalation and exhalation are like the hissing of the serpent. Lord Siva Himself became the five Tanmatras, the five Jnanendriyas, the five Karmendriyas and other groups of five. The individual soul enjoys the worldly objects through these Tattvas. *When the individual attains knowledge through control of the senses and the mind, he finds his eternal resting abode in Lord Siva, the Supreme Soul*. This is the esoteric significance of Lord Siva wearing the snake on His body. Lord Siva is absolutely fearless. Srutis declare, “This Brahman is fearless (Abhayam), Immortal (Amritam).” Worldly people are afraid even at the very sight of a snake but Lord Siva is wearing serpents as ornaments on His body. This indicates that Lord Siva is absolutely fearless and immortal.

Generally serpents live for hundreds of years. Wearing of serpents by Lord Siva signifies that He is Eternal.

*Lord Siva smears Vibhuti on His body*. What is the significance of Vibhuti? Vibhuti is that ash which is the result of fire consuming everything into it’s Vedi. Anything impure , when put into fire , gets reduced to ash, transformed into a state of purity, with no trace of impurity. By smearing ash on His body, shiva here teaches us silently that people should have pure heart and entertain pure thoughts and should be free from crookedness, diplomacy, cunningness, jealousy, hatred, etc., by offering any level of impurity into the Yajna of Life.

*Lord Shiva wears three white-lined Bhasma* or Vibhuti on His forehead. What is the significance of this? He teaches silently that people should destroy the three impurities, viz., Anava (egoism), Karma (action with expectation of fruits), and Maya (illusion), and the three desires or Eshanas, viz., desire for landed property, desire for woman, desire for gold, and the three Vasanas, viz., Lokavasana, Dehavasana and Sastravasana, and then attain Him with a pure heart.

*What does the Balipitha or altar which stands in front of the sanctum sanctorum of the Siva’s temple represent? People should destroy their egoism and mineness (Ahamta and Mamata) before they attain the Lord. This is the significance.*

What does *Nandi* or the bull which is in front of Sivalinga represent?

*Nandi* is the attendantor door-keeper of Siva. He is the vehicle of Lord Siva.Nandi is always seen to “associate” himself with the shiva Lingam in every place of worship of Shiva.Nandi, thus, represents Satsanga, “association with Truth”. If you make association with the sages, you are sure to attain God-realisation. Sages will show you the way to reach Him. They will remove pitfalls or snares that lie on your path. They will clear your doubts and instil in your heart dispassion, discrimination and knowledge. There is no other safe boat than Satsanga to reach the other shore of fearlessness and immortality. Even a moment’s Satsanga or association with the sages, is a great blessing to the aspirants and the worldly-minded persons. They get firm conviction in the existence of God through Satsanga. The sages remove the worldly Samskaras.

The company of sages is a formidable fortress to protect oneself from the temptations of Maya.

Lord Siva represents the destructive aspect of the Godhead. He is seen absorbed on the mountain peak of Kailas. He is an embodiment of serenity, renunciation and indifference to the world. The third eye in the centre of His forehead represents His destructive energy which when let loose destroys the world. Nandi is His favourite. He is the door-Keeper. He is seen hushing all nature, so that the Lord may not be disturbed in His Samadhi.

Vrishabha or the bull represents Dharma Devata. Lord Siva rides on the bull. Bull is His vehicle. This denotes that Lord Siva is the protector of Dharma, is an embodiment of Dharma or righteousness.

Generally, we see Nandi sitting directly opposite the main door of the temple where Shiva’s idol or Shivalingam is located.

He is not waiting for him to come out and say something.

He is in waiting.

Nandi is a symbolism of eternal waiting, because waiting is considered the greatest virtue in Indian culture.

One who knows how to simply sit and wait is naturally meditative.

He is not expecting anything. He will wait forever.

Nandi is Shiva’s closest accomplice because he is the essence of receptivity.

Before you go into a temple, you must have the quality of Nandi – to simply sit.

So, just by sitting here, he is telling you, “When you go in, don’t do fanciful things.Don’t ask for this or that. Just go and sit like me.”

You are willing to just listen to existence, to the ultimate nature of creation.

You have nothing to say, you simply listen.

That is the quality of Nandi – he just sits, alert, not sleepy. He is not sitting passively. He is very active, full of alertness, full of life, but just being – that is Meditation!