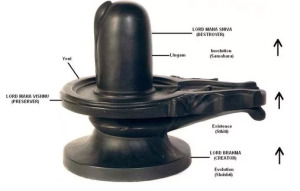 The Linga is only the outward symbol of the formless being, Lord Siva.

Linga means ‘mark’ in Sanskrit. It is a symbol which points to an inference. When you see a big flood in a river, you infer that there must have been heavy rains the previous day. When you see smoke, you infer that there must be fire. This vast world of countless forms is a Linga of the omnipotent Lord. The Siva Linga is a symbol of Lord Siva. When you look at the Linga, your mind is at once elevated and you begin to think of the Lord.There is a mysterious power or indescribable Sakti in the Linga to induce concentration of the mind. Just as the mind is focussed easily in crystal gazing, so also, it attains one-pointedness when it looks at the Lingam. That is the reason why the ancient Rishis of India have prescribed the Lingam for being installed in the temples of Lord Siva.

Many years ago, at the end of a destruction, there was water everywhere in the universe and the universe was shrouded in darkness. Vishnu slept on the water in his form of Narayana. Brahma discovered Vishnu sleeping thus and woke him up. Failing to recognize Vishnu, he asked, “Who are you and what are you doing here?” Vishnu woke up and noticed Brahma standing there. He smiled and said, “How are you, Brahma? Is everything well with my son?’ “How dare you call me your son?’ demanded Brahma. “I am Brahma, the lord of everything. I am the creator of the universe. How dare anyone call me his son?” “You seem to have forgotten everything,” said Vishnu. “I am Vishnu and you were born from me. That is the reason why I addressed you as my son.” Brahma did not accept this and started to fight with Vishnu. While the two were thus grappling, a shining linga suddenly appeared. It was almost as if the linga had emerged to settle Brahma and Vishnu’s dispute. The linga rose way up into the sky and it seemed to have no beginning or end. “What on earth is this pillar of fire doing here?” Vishnu asked Brahma. “Let us investigate it. Why don’t you go up and see where it ends? As for me, I shall proceed downwards. Let us meet after a while and compare notes.” Brahma agreed to do this. He adopted the form of a swan and flew up. Vishnu adopted the form of a boar and went down. No matter how further down Vishnu went, he could find no end to the linga. Nor could Brahma discover its upper extremity. They returned and were amazed to find that neither had been able to find the end of the linga. They realized that they must be in the presence of a power that was greater than their own. They therefore began to pray to the linga and the sound of the mantra (incantation) om echoed all around the linga. Shiva appeared from within the linga in the form of a sage named Vedanama. He told them that it was the linga which was the origin of the universe. It was from the linga that the primordial egg (anda), the origin of the universe, had been created. Shiva also taught Brahma and Vishnu the sacred gayatri mantra.

He told Brahma and Vishnu, “We are all three part of the same supreme brahman. Brahma is the creator, Vishnu is the preserver and I am the destroyer. Don’t fight amongst yourselves.” Ever since that day, Shiva has been worshipped in the form of a linga..